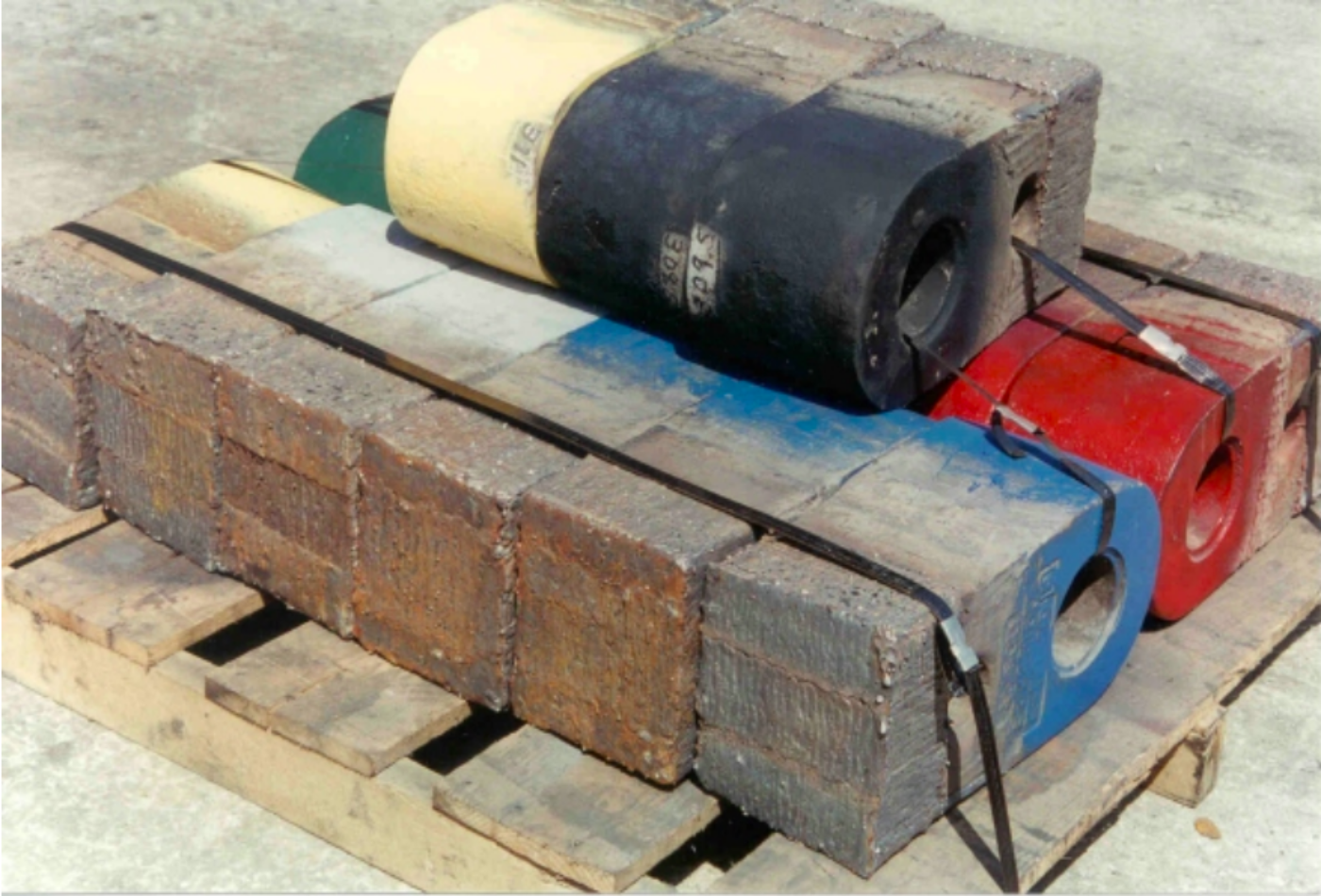 Underground coal mines contain a lot of rock, as well as the coal seam itself. Under normal conditions, where the rock is not that abrasive, crusher hammers can last up to 12 to 14 weeks. But in conditions where the rock is highly abrasive, crusher hammers can wear out in as little as 4 weeks. Replacing the hammers is time consuming and expensive. Labor and material costs of hammer replacement can be high, but it pales in comparison to the most expensive item, equipment downtime. Mines are increasingly focusing on reducing down-time, and contracting with OEM’s of the equipment to focus on maintenance programs. Such was the case when a major manufacturer of coal crushing equipment for underground mines approached Postle Industries, Inc. to help solve the excessive wear of their customers crusher hammers in a Pennsylvania mine. These hammers were wearing out in 4 weeks. The goal was to increase the service life by 100%. Engineers from both companies corroborated and came up with a novel design that far exceeded the goal of 100%. The current hammers were made of 4140 steel and hardfaced with two layers of a martensitic alloy (~55 Rc). The obvious approach would be to substitute a more wear resistant hardfacing product. However, highly abrasive resistant hardfacing products are traditionally limited to two layers (~ 1/4"). Additional layers results in premature wear and spalling. In addition, once the wear eliminates the hardfacing layer, accelerated wear occurs in the less wear resistant base metal. Since the current hammers wear to an inch or more before being retired, a more aggressive approach to this problem was required. The application clearly required a thick, highly abrasive resistant product, coupled with a procedure that would not result in premature spalling. Postle engineers suggested that their new "AR INLAY" process (patented) should be considered. The process basically consists of creating deep cavities in a working face and subsequently flood welding these cavities with Postalloy® Inlay 93, a highly abrasion resistant alloy, designed for use with the AR Inlay process. The final surface could then be capped with traditional hardfacing products if desired. In this case, it was felt that a single layer of an iron-based, tungsten carbide alloy, Postalloy® 299-MCO would be effective.
The final design required additional changes. The first design change was a substitution of the base alloy from 4140 to AR400. Unfortunately, AR 400 was in short supply at the time and T1 steel was substituted. T1 is considerably softer and far less wear resistant than AR 400, but in order to meet the next change out of hammers on the crusher, T1 was selected. To facilitate a quicker hammer change out, a bolting system was substituted for the previously welded procedure. This resulted in a slightly shorter wear depth over the current hammers which could possibly compromise hammer longevity. To accommodate the Inlay process, six 1-3/8" diameter holes were to be drilled into the face of each hammer to a depth of 1-1/2 inches. These holes were slightly staggered to accommodate the irregular shape of the hammer face.
The following procedures were used to flood weld the cavities with Postalloy® Inlay 93 and apply a hardfacing layer of Postalloy® 299-MCO. A complete set of hammers (10) were prepared using the above procedures, installed and monitored closely. After the 4th week, when the hammers are usually scheduled to be retired, the Inlay hammers showed little sign of wear. A good deal of the Postalloy®299-MCO was still in tact. After the 6th week, the wear was starting to penetrate into the Inlay 93. From that point on the wearing process oscillated between the Inlay 93 and the T1 matrix material. As the wear increasingly reduced the T1, it left the Inlay 93 standing proud. A point was reached where the proud Inlay 93 started to wear and continued until the T1 started to wear again. The oscillation continued in this manner throughout the life of the hammers. Much of the material to be crushed flows in the center of mill, resulting in a higher hammer wear on the inner hammers. At the end of 16 weeks, it became apparent that the bolt-in design did reduce the hammer wear depth, as mentioned previously, and the hammers were retired. If the previous weld-in design was used, an additional 4 weeks could have been realized, increasing the wear to 20 weeks. This leads to an extrapolated wear life of 400% over the current hammers, far better than the 100% goal. The mine and the OEM were quite pleased and incorporated the new Inlay design on all crushers throughout their mining systems. Clearly the Inlay design is a far superior approach to conventional hardfacing. Various combinations of base material and hardfacing alloys can be employed to overcome the most challenging of wear problems. Thick deposits are now possible, thereby increasing component longevity and decreasing costly down time of heavy equipment.

Clean all holes thoroughly, making sure water, oil and debris are removed.

Preheat the hammer to 700ºF Starting at the bottom of the hole, weld in circular mode with Postalloy® Inlay 93 and with appropriate shielding gas.

Fill the hole thoroughly while maintaining a minimum interpass temperature of 700ºF. Do not stop welding until the hole is filled.

Before breaking the arc, use crater filling techniques to put a slight crown on the deposit. This will help prevent cracking.

Immediately after filling the hole, peen the deposit surface. This will also help reduce cracking.

Deposits are slag free and will check crack.

Peening is not required.

Worn and New Hammer Comparison (prior to hardfacing)